Verona, Italy (December 12 2019) – During Veronafiere and Vinitaly’s annual business forum wine2wine (November 25-26 2019), Wine Spectator Senior Editor Bruce Sanderson announced the OperaWine 2020 line-up of 103 Italian wine producers chosen by the American wine magazine. The selected producers will be pouring their wines during Vinitaly’s exclusive gala, which is scheduled to take place on Saturday April 18 2020. The full list of Italian wine producers selected by Wine Spectator is available below and at the following link: https://vinitalyinternational.com/wordpress/vincitori-operawine-2020/. OperaWine is the only tasting event that Wine Spectator organizes outside the United States.

At the end of the first day of wine2wine, attendees gathered in the main auditorium for the official announcement of the OperaWine 2020 selected producers (the session was live-streamed on wine2wine Facebook channel). Veronafiere CEO Giovanni Mantovani opened proceedings by thanking Wine Spectator for their untiring work in supporting Italian wines and Wine Spectator’s senior editor Bruce Sanderson then called on stage the selected producers. In this year’s edition, Wine Spectator featured 11 new producers who will pour their wines for the first time at OperaWine 2020 and 10 wineries that will be returning to the event after a hiatus of a few years. In his opening speech at wine2wine, Sanderson commented on the rationale behind the compilation of the OperaWine list:

Lately, we have asked producers to pour older vintages, library selections, which we think make the event more interesting. Over the years we have also changed the line-up quite a bit. Probably each year we change about 15 to 20% of the producers and since the first edition we have had about 200 different producers participating in OperaWine.

After the announcement, producers were called on stage to pose for the traditional group photograph and were given a personalized wine bottle to commemorate the inclusion in the OperaWine 2020 selection. The bottle was offered by wine2wine sponsor ATIU. 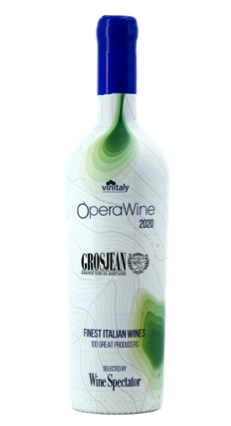 In another session at wine2wine, Sanderson also illustrated the results of an online survey conducted among Wine Spectator readers about wine consumption in the United States with a particular focus on Italian wine. Highlights of the survey include the primacy of Italy as the favorite among old world regions (59,17%) as well as interesting data regarding consumer habits, with women (57,66%) purchasing Italian wine according to grape varieties and men (66.15%) purchasing according to producer of winemaker. Sanderson’s presentation followed by Q&A is broadcast in full on the wine2wine Facebook channel.

About Vinitaly
The grand Vinitaly 2020 will be held from April 19 to 22. Every year, Vinitaly counts more than 4,000 exhibitors on a 100,000+ square meter area and 130,000 visitors from over 140 different countries with more than 30,000 top international buyers. The premier event to Vinitaly, OperaWine “Finest Italian Wines: 100 Great Producers selected by Wine Spectator” which in 2020 will be held on April 18, one day prior to Vinitaly, will unite international wine professionals in the heart of Verona, offering them the unique opportunity to discover and taste the wines of the 100 Best Italian Producers, as selected by Wine Spectator. Since 1998 Vinitaly International travels to several countries such as Russia, China, USA and Hong Kong thanks to its strategic arm abroad, Vinitaly International. In February 2014 Vinitaly International launched an educational project, the Vinitaly International Academy (VIA) with the aim of divulging and broadcasting the excellence and diversity of Italian wine around the globe. VIA this year launched the seventh edition of its Certification Course and today counts 215 Italian Wine Ambassadors and 15 Italian Wine Experts. Since its foundation in 2014, over 560 candidates from all over the world have taken VIA’s courses.